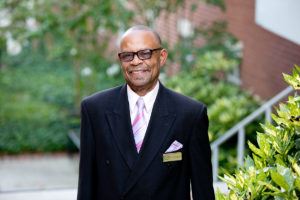 A. D. "Chuckie" Reid's first term with the town council began in 1986; he has served as vice mayor since 2008. Reid attended Southside Virginia Community College and served four years in the United States Air Force. Reid chairs the Personnel Committee and serves on the Town Property/Building Committee. He is also the Town representative on the Moton Museum Board. As vice mayor, Reid assumes the duties of the Mayor in his absence or unavailability. A member of "the lost generation" affected by the 1959-64 Prince Edward County school closing, Reid returned to Farmville after completing his military service. His decision to run for town council was inspired by the late Rev. L. Francis Griffin who believed "working with people is a great thing." Reid is a member of the Royal Supremes and the Community Helpers of Prince Edward and serves as vice president of the Moton Museum Board. Reid is retired from the U.S. Postal Service in Farmville and his hobbies include reading and music, and he resides in Farmville with his wife Frances. Reid was recently featured in an article spotlighting local government officials in the publication "Virginia Town and City."